Imran Khan says Islam is not the enemy

“Everyone must understand terrorism is never caused by religion. The roots of all terrorism lie in politics and so do the solutions.

“When (US President) George Bush and (former British prime minister) Tony Blair talk about radical Islam . . . the man in the street in the West is suspicious of all Muslims.”

He said the US was “manufacturing terrorists” through its continuing military action in Pakistan’s border regions with Afghanistan, where they believe al-Qaida forces are in hiding.  >>>>> 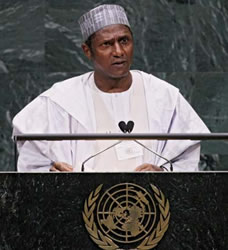 President Umaru Musa Yar’Adua and other top political office holders have urged Nigerians, especially Muslim faithful to reflect the lessons of the Holy Month of the Ramadan in their daily endeavours. The president, in a goodwill message to Muslims on the occasion of the Eid-el-Fitri celebrations, urged all Nigerians to let their actions match their prayers.  >>>>>

God should deny me governorship if … – Ajimobi

The All Nigeria People Party (ANPP) governorship candidate in Oyo State, Senator Abiola Ajimobi, on Monday asked God to deny him the governorship seat if he was going to amass wealth from the public coffers.

The governorship candidate said this at a Ramadan lecture entitled “Role Of Islam in Eradicating Corruption in Governance,” held in Ibadan, Oyo State.

He said there were many politicians who were targeting positions because of their selfish interest. Senator Ajimobi said “if my name will be spoilt by occupying the seat of government, may God not allow me to occupy it,”… >>>>>

We need that kind of accountability in the U.S., not to mention several other dozen nations.

Others, particularly since the Sept. 11, 2001, attacks, have used the holiday for activism, organizing iftars around Islam-related films or lectures or interfaith events. These changes represent soul-searching by some Muslims about how to create an American Islam, a trend pushed in particular by progressive Muslims seeking gender equity and more engagement with other faiths. >>>>> 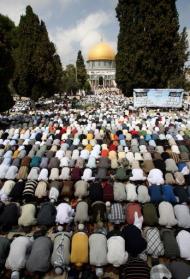 Al-Aqsa mosque — on Islam’s third holiest site — has been a major flashpoint in the Israeli-Palestinian conflict and was the site of the outbreak of the latest Palestinian uprising in 2000.

Jews believe the compound including the mosque was the site of the Second Temple — Judaism’s holiest site — which was destroyed by the Romans in 70 AD.    >>>>> 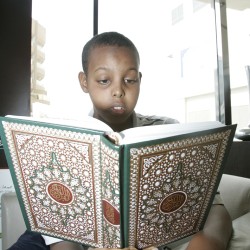 Dubai: Malaysian wonder-boy Mohammad Bin Ahmad Zahid, 13, took the honours at the Dubai International Holy Quran Awards (DIHQA), this year.  More than 80 contestants from as many countries participated in the contest to find out who is the best in reciting the Holy Quran – a regular feature during Ramadan for the past 12 years.  >>>>>

After four decades of armed conflict between the Filipino state and the Moro Muslims, the two parties agreed to sign an agreement that would end the conflict. However, the supreme court of the Philippine declared the agreement illegal on August 4, which caused the conflict to resume. During the ongoing clashes over Muslims were killed and over 250,000 were displaced. The displaced families are staying in tents pitched on marshlands and are trying to practice the fasting of Ramadan.  >>>>>

United Food and Commercial Workers Local 7 and Swift met Tuesday to work out differences, which included time for prayer. After talks broke down some Muslim workers said, “No prayer, no work.” >>>>>

Sheikh Khalifa bin Zayed, who was hosting a group of religious academics and preachers for Ramadan at Bateen Palace, urged his guests to promote Islam’s essential values of tolerance and mercy in their teachings while remaining up-to-date on modern changes and developments in the faith, reported the government news agency WAM.  >>>>>

While respecting what Sheikh Khalifa is saying, it appears that the headline indicates a different message to a Western reader.   There is no such thing as moderate Islam.  Islam is what it is.  Anything aside from it is a corrupted Islam.  Many are simply not practicing what Islam has always taught.  Without giving cause to alarm…’moderate’ in his words actually means ‘pure or fundamental (getting back to the basics).’  Unfortunately, many in the West look at the term ‘fundamental’ as an extreme thing.

If, for example, saying that “charging a very small amount of interest makes one a more ‘moderate’ Muslim.”  This is incorrect, it is considered sinful in Islam.  But, what it actually is, more moderate for a non-Muslim.

The Sheikh’s mentioning of progress and development is actually a part of many factors that many in the West fail to understand about Islam.  Islam promotes the use of the intellect, such as Math, Sciences and reading.  In addition, there is a direct correlation to the ‘increase’ in population (practicing procreation), as opposed to ‘decrease’, in making progress.

These two aspects are mentioned because of the understanding, or lack thereof, amongst many in the West.  There is a common stereotype that Muslims care not to progress academically, but are stuck in the ‘stone age,’ as goes the saying.  Another misunderstanding and great fear of Westerners is world over-population; therefore the great desire and push for population control, be it through contraception, abortion, medicine, economics, law — or even war.

The rebels said it would not return to the negotiating table unless Manila honors it commitment to the accord that would grant about four million Muslims their own homeland in more than 700 villages across the troubled, but mineral-rich region on Mindanao.  >>>>>

US losing the moral high ground 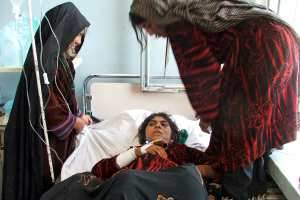 First came reports that foreign and local troops had stormed a house in Kabul, killing a man, his wife and two children. Next, ISAF admitted four children had died in the south-eastern province of Paktika after being hit by its artillery.The question Afghans are asking is “Why do they do these things?” and, increasingly, there appears to be no obvious answer. Even Hamid Karzai, the country’s president, struggles to explain the reasons his allies make so many mistakes that cost innocent lives.  >>>>> 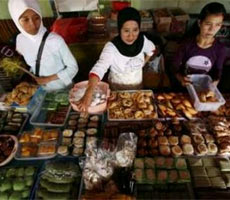 “It’s great that we can break the fast outdoors like this,” Dyah, a resident of the old historic district of Sensen, told the Jakarta Post on Sunday, September 7. >>>>>

It’s important, and refreshing, to show the good examples and not just deal with the unfortunately, unjust negativity towards Islam and Muslims.

“We uncover the faces of veiled women by force if necessary,” he said. “We also arrest anyone teaching religion to children illegally,” he said, adding that police were also helping to enforce a ban on Muslim restaurant closures in Ramadan.  >>>>>

And the people of the West wonder why Muslims have difficulties trusting democracies, communist states and other political ideologies.  They are trying to not become like those in Palestine and Xinjiang, China.

Imagine if your government forced the headscarves off of nuns; or snatched yarmulkes off of rabbis and snipped their beards…what kind of oppressive thoughts come to mind, and how would you, as an American respond?  Then ask yourself; Republicans…what exactly do you mean when you say, “We need to protect our right to bear arms, in case of ‘government’ oppression?”  Now, what role do you see yourself in comparison to the Chinese government?

Islamic bank card to be rolled out across Russia 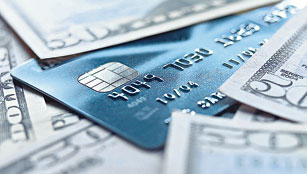 Conventional bank accounts are considered a taboo under Sharia Law, which prohibits Muslims from both receiving interest on deposits and paying interest on overdrafts and loans. But as there are currently no Islamic banks in Russia, Muslims in the country have been left with few alternatives.

The new Islamic debit card promises customers that any interest earned on their accounts will be donated to charitable causes, such as maternity wards for local hospitals. The terms of the card were decided by the bank in cooperation with the Spiritual Council of Muslims in Dagestan, which also helped with the card design to insure its appearance would conform to Islamic law, such as avoiding visual depictions of living beings.   >>>>>

I’m not convinced that these follow the rules of Islam.  The charities receiving the donations are still receiving interest; essentially making them complicit in the practice of gaining interest — which makes for a corrupt economic system based on religious law.

Think of it as receiving stolen goods; does the recipient still keep the goods after being discovered by authorities that the items were indeed stolen?  No.  Another, probably more appropriate example would be supporting a local hospital with proceeds from laundered money gained from drug dealings, with the hospital administrators’ knowledge.

The factor of risk is still taken away from the banks.  While it is a step in the right direction, it opens up new challenges for the charities who believe they are earning halaal (permissable funds).  This is a compromise that would allow for practices to have an Islamic (stamp of approval) label, yet corrupt from within — another step towards dumbing down and further secularizing the Muslim population.

The New York Daily News ran a story with the headline “NYPD beefs up security for Ramadan,” and readers might have been forgiven for thinking that New York cops would be on alert against terror attacks possibly coming during the month in which Muslims redouble their efforts to serve Allah — right? Wrong. In reality, the NYPD is beefing up its protection of the mosques themselves. Apparently they are under threat from venomous Islamophobes, and that threat heightens during Ramadan. “Local precincts,” said the report…  >>>>>

Mukhtar also quoted a passage in the holy Koran, Surah Al Baqarah Chapter 2:190, that reads: “…You should only fight those who commit aggression against you and leave you no option but to fight. This war will be in the way of Allah Almighty i.e. for the protection of humanity from tyranny and oppression – but even in this war the limits of Law must not be transgressed, for such transgression is against the Laws of Allah.”  >>>>>

Ex-Professor in Palestinian Case Is Freed After 5 Years

Sami al-Arian is awaiting trial on charges of refusing to testify before a grand jury about a cluster of Muslim organizations in Northern Virginia. A federal judge on several occasions has expressed skepticism about the government’s contempt charges, and last week she ordered immigration authorities to explain by yesterday afternoon why they were continuing to hold Arian. >>>>>

Coca-Cola takes a pop at Vimto in the Middle East

“In a globalising world, Ramadan presents an opportunity to showcase the true values of Islam and what it stands for,” said Coca-Cola when it announced the can. “Because no other brand is as inclusive as and no other company is as diverse as Coca-Cola, we have a unique opportunity to play a valued role as an international bridge-builder and facilitator of dialogue during Ramadan.”  >>>>>

EL-ARISH, Egypt, Sept 1–Egypt has sealed off the border crossing between Sinai and the Gaza Strip after a brief opening allowed thousands in and out of the besieged territory, a security official said. >>>>>

5-Pillar Column
Create a free website or blog at WordPress.com.