Report Finds Iraq Water Treatment Project to Be Late, Faulty and Over Budget 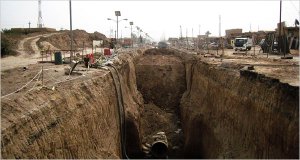 A huge American-financed wastewater treatment plant in the desert city of Falluja, which United States troops assaulted twice to root out insurgents in 2004, was supposed to be the centerpiece of an effort to rebuild Iraq, a country smashed by war and neglect, and bring Western standards of sanitation.  >>>>>

President Karzai has been under pressure from the US and other allies to do something about the growing problem of corruption in his government, forcing him to shuffle his cabinet earlier this month. The mounting allegations have even extended to his family, with his brother reportedly linked to the nation’s burgeoning heroin trade.  >>>>>

Broad war often follows. How anybody could think the sharing of bank and oil executives with federal government leadership as a move toward progress on the evolution chart, that is moronic. Surely, it is about political power and corruption. The military budget is sacred, and private contractor deals are made without bids. Now five to six energy giants will hog all Iraqi oil service contracts. The terrorism topic is untouchable for dispute. A Coup d’Etat is in progress as the Wall Street conmen and fraud kings have taken implicit control of the USGovt. This will be recognized in time, even while resistance is evident. To me the ongoing drama smacks of a comedy of corruption. US citizens are in shock & awe, while foreigners are aghast in disgust. >>>>>

Pakistani prosecutors said Tuesday they are pressing ahead with corruption cases against opposition leader Nawaz Sharif, a move his lawyer called politically motivated as the presidential race grew increasingly testy.  >>>>>

…The coup has also been backed by the majority of the country’s politicians.   >>>>>

Maybe according to the majority of the country’s politicians, presently in office – POST COUP.  But according to the most recent elections, prior to the coup — the PEOPLE spoke otherwise.  That’s part of the problem with our understanding of democracy – it’s kind of like statistics…we tend to spin matters to subsets of people (numbers), manipulating other variables in order to justify the ‘new official position.’   We are forgetting about an element greater than that of the label of democracy itself….the rule of law.

Would Americans accept it if a “…coup has also been backed by the majority of the country’s politicians?”  Not too hot of an idea, I take it.  If a coup successfully took place in a country, do you really believe those against the coup would be open to voice their opinion?  Didn’t think so on this one either?  Power is respected more than democracy itself.

…which claims more than 600,000 subscribers in 134 countries to its flagship “Believers Voice of Victory” magazine.  The board of directors signs off on important matters, they say.  Yet church bylaws gives Copeland veto power over board decisions. >>>>>

Funny thing, just today, I received a comment from someone wondering why I wanted to come (immigrate) and evangelize in his country (U.S.).  Why is it okay for evangelicals to go to other countries and do what they don’t want done here?

If this pastor were a Muslim, the church (mosque) would have been shut down, the mansion, plane and website would have been invaded and seized, as well as all other assets; and he would be accused of spreading terrorism through his writings.

The BBC’s embarrassing attempt to dig itself out of a hole that keeps getting deeper was again exemplified during their latest yellow journalism hit piece on 9/11 truth, in which they played Larry Silverstein’s “pull it” comment but edited out the most important part of the statement, and in doing so changed its context altogether.

An army of informed truth activists are almost tripping over each other to point out the gargantuan number of errors, ad hominem smear tactics, bias and shoddy investigative techniques displayed in the program which aired Sunday in the UK. Read entire article

This man makes billions off the tragedy; the media protects him.  If his last name were ‘Obama’ for example, would he not have been at Guantanamo by now?